Your voucher's on its way.
Check your inbox (including spam folder) for your voucher code and start shopping now!
Great to have you back!
Check your inbox for trend updates and exclusive sales coming your way!
(The S$ 20 voucher applies to first-time subscribers only.)
Looks like you're already subscribed.
Close
Get S$ 20 off
your next order!
Enter your email for ZALORA news and deals
By signing up, you agree to the terms in our Privacy Policy
For first-time subscribers only

More Others by Ollie 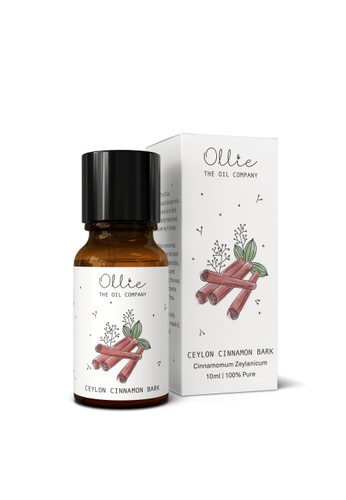 Ollie Ceylon Cinnamon Bark Essential Oil is 100% pure and natural. As the name suggests, Ceylon cinnamon or true cinnamon, as it is popularly known, originates from Sri Lanka.

Dried inner bark of this tree is steam distilled or water distilled to produce oil. Unlike its more commonly available cousin Cassia, this species is contains very little naturally occurring coumarin. Cinnamon bark oil is considered to be of the strongest natural antibacterial agents and it also has strong anti-clotting properties. It is also used as a stimulant and astringent.

This oils is widely used for its anti-inflammatory and antimicrobial properties to help with coughs, colds, constipation and also control diabetes.

It is also often used in toothpastes to fight bad breath, or in topical applications to relieve skin infections, minor wounds, relieve stress, and also protect against insects.

You could dab a few drops on a piece of cloth to inhale from it. Or you could add some in your bath. This oil can also be used as a flavouring agent in your cooking, to impart a fragrant spicy, cinnamon flavour.

Check out our FAQ here

We have received your request!

Psst... we have already received your request

You will be notified
when your size is back in stock

- Do note that due to final clearance, hygiene concerns or supplier requests, certain items are non-returnable, non-refundable and non-exchangeable.

- Should you have any questions regarding this product, please feel free to get in touch with our friendly Customer Experience Team here.

Regular Shipping
Delivery by: 26 - 28 Jan
Shipping fee: Calculated at checkout
Free shipping when you order above S$ 50.00 for items sold by Ollie
- Due to supplier's request for this item, please note that the available payment methods are currently pre-paid options such as via credit card and Paypal.

- Should you have any questions, please feel free to get in touch with our friendly Customer Experience Team here.

Ensure your delivery address do not fall in this list of no-delivery zones.

Your order will arrive between Monday - Friday.

For more information, check out our FAQ on deliveries.
Track your order